In 2017 we successfully challenged the federal census numbers used for Red Lake’s Indian Housing Block Grant amounting to a $1,074,880 increase in their allocation for 2018 and $743,417 to their 2019 allocation (retroactively applied)

The Red Lake Band of Chippewa, located on the Red Lake Reservation in rural northern Minnesota, struggles with one of the most dire housing situations in the United States. With an estimated population of 6,597 there are at least 117 families without homes. Additionally, there are at least 235 households that experience a severe housing cost burden (where over 50% of their income is used for rent/utilities) and at least 140 households that lack adequate kitchen and/or bathroom facilities. The situation at Red Lake is mirrored on Native American Reservations nationwide. According to the National American Indian Housing Council (NAIHC) “overcrowding, substandard housing, and homelessness are far more common in Native American communities.” NAIHC, citing HUD data point out that “5.6 percent of homes on Native American lands lacked complete plumbing and 6.6 percent lacked complete kitchens. These are nearly four times than the national average, which saw rates of 1.3 percent and 1.7 percent, respectively.”

Since 2005 Village Earth has assisted several American Indian Tribes who believe the federal census data does not accurately reflect the reality that exists at their Reservations but needed solid data to test that belief. There is ample evidence for Tribes to be suspicious, especially for tribes in rural parts of the country where the Census Bureau may lack accurate maps of housing and where response rates may be lower than other sociodemographic groups. According a 2018 GAO report “the [Census] Bureau estimated that it missed nearly 5 percent of American Indians living on reservations—the sociodemographic group with the highest percent net undercount in 2010—whereas the Bureau estimated it overcounted almost 1 percent of non-Hispanic whites.” Over the years, Village Earth has innovated a methodology to create more accurate maps of housing in Indian Country but more importantly, we have over 20 years experience conducing surveys and needs assessments in Indian Country and understand the unique challenges and opportunities that exist for collecting complete and accurate data. Paramount to our approach is working closely with local stakeholders and training locals to do the data collection using state-of-the-art methods and tools.

Each census challenge begins with the creation of a detailed map of all existing housing units. 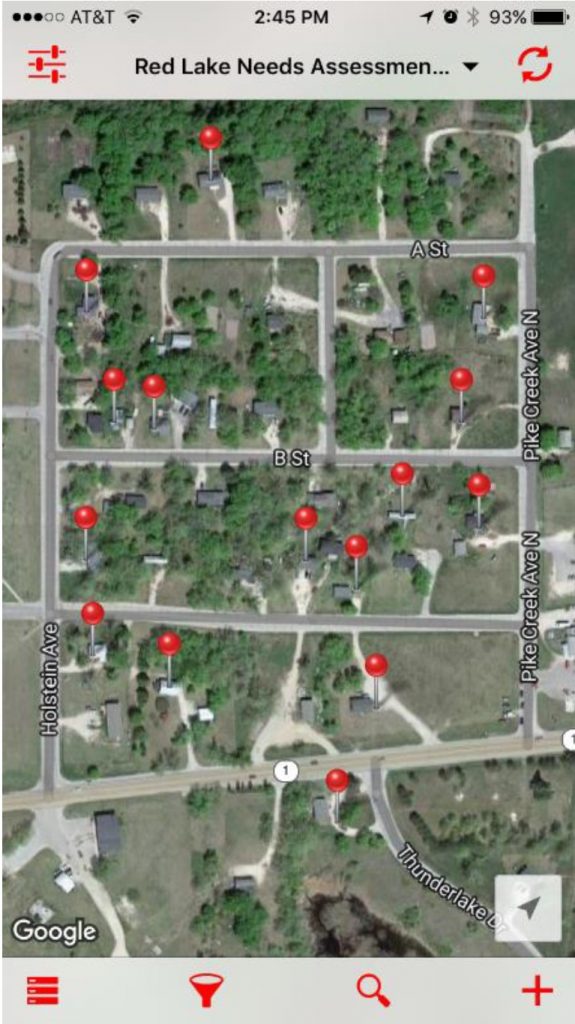 After we generate a random sample of housing units, we load the locations of selected houses we use a mobile app to locate units and collect data required for challenge.